Early schooling was a day that started from Watrepara, their home, was one of great excitement. The parents had many misgivings, but the lads were highly elated because of their great adventure. After the years, Omed and Ramke decided to take Christianity as their religion and took baptism on Sunday, February 8, 1863, at Sukheswar Ghat, Gauhati. Time and again, both uncle and nephew approached to send them back to their people by writing an application for their discharge. At the outset, Colonel R. Campbell responded with expressions of interest in the undertaking. So seven of them—Omed, his wife, and three children and Ramke and Suban took a boat down the river and arrived at Goalpara on May 10, 1864.1

Their first endeavor was to gain the goodwill of their relatives—Reban, the first cousin, and Fokira, the second brother of Ramke, who was at Goalpara at that time. On explaining the object of their mission, Reban would have nothing to say to them; but Fokira was friendly and willing to help. So, it arranged that Ramke should open a school at Damra and Omed tour among the villages on the heights above. Then while a schoolhouse was building, they all went up to the hills. In a few days, Ramke returned to Damra, taking his youngest brother and two other boys with him as a nucleus for his school. So, in 1864 the first regular school started at Damra, where Ramke and Fokira look after it.

Six months have passed away since they first went up to Watrepara. They stayed there as long as they could, but at last, they have driven away. They turned their steps sorrowfully away and came down to the foot of the pass. Have they abandoned their purpose? Not at all!

On the contrary, this spot had chosen skillfully to further their plan of campaign. Omed can hear them coming, and if he pleases, join them as they go by or wait and watch for their return. He has calculated well. All these must explain, and Omed loves nothing better than telling and commenting on his trust.2

Years go by since 1864 as they came down; it took more than three years to win his own people’s souls to Christ. Despised much hated and reckless situations people took into wrong ways, they ceased their wicked things. Later on, they made a fresh request to Dr. Bronson to Rajasimla and a letter signed by eight Garos representing different villages. With much gladness in his life, Dr. Bronson came down from Nowgong and arrived in the evening at Rajasimla on April 12, 1867. On the next day, he gave baptism to twenty-seven, of whom thirteen were women. Then, Dr. Bronson opened a school at Rajasimla on that occasion and appointed Fokira as a teacher. He soon had a class of seventeen young Garo men, a type of thirteen small boys and Garo girls. “But do you want your girls taught?” he was asked. “Yes, the girls as well as the boys,” Fokira replied. Here was the foundation which led the missionaries to say, “Other schools will follow, and we will soon have plenty of good Christian Garo teachers who will preach while we teach.”3

In the later year 1868, Ramke had 30 students, both young and old; Fokira (Ramke’s brother), who was in charge of Rajasimla School, had another student body of 13, including three girls.4 Since then, with the inspirational employees of the first educational fields, many schools were set up. Now, these institutions are extending, disciplining, and yielding as one of the role models of the Church. The schools are:

One fascinating wonder was happened to Dr. Stoddard and his wife at Goalpara. A Garo boy—Rudram and his mother had come to the station on foot in a single day from their village, a distance of twenty-five miles or more. She was a tall, strong, noble-looking woman. “This is my only son and child,” she said to Mrs. Stoddard. “I bring him to you that he may learn wisdom. We Garos know nothing, not even God, only devils.” Then, when asked to remain a few days, she replied: “By no means, my husband is lame and cannot wait on himself much. No one in our village now will even cook rice for him, for we have ceased to worship demons and worship Christ, and we receive great abuse from our neighbors and friends.” Then, at dawn, she was up and away.6

Early Literary Works
The attention was given to plans for educational work, and the Government sanctioned a grant of two hundred and fifty rupees to prepare and print Garo books. Also, a monthly contribution of fifty rupees was given to the school, now called “the normal class” at Damra, and fifty-two rupees for village schools. In reducing the Garo language to writing, the missionaries were free to choose between Bengali, already familiar to the Christian leaders as it used by both the Bengalis and the Assamese, and the Roman character, which would introduce them to the English vocabulary.7 In the early days of 1868, Dr. Bronson came again to Goalpara and stayed at Goalpara for a month, where he prepared a book entitled “Garo Primer.” Later on, with the help of William Carey of Assam (a linguist), again he prepared two books entitled, “A Reading Book” having of some sixty pages and “The First Catechism.”8

It was, therefore, a daily process for students in those schools to study and learn about Christian principles and the way to Christ. The education program in Garo Hills was a Government-cum-Missionary project. When a Garo teacher was sent to open a new village school, he was usually a convert, full of zeal and enthusiasm for propagating the Gospel. Through these mission schools, the Government knew that the Garos could bring under Government administration without blood-shed. As a result of introducing mission schools, there was an immense benefit for the neighboring Hindu villages. Another factor that made an unparalleled contribution towards Church growth during this period was the Garo leadership because the Garos, by nature, were brave and sturdy. During the early period, the leadership of the Church came from men who had served in the police and had become Christian missionaries, volunteered themselves, and sacrificed their lives to pass the Good News for the unreached people.9 Since then, the earlier educational status became one of the factors that led to the advancement of the Church.

One of the Primary teachers said, “Education is the main character for the cognitive process of changing the society and the Church without education no one could spring up and modernize the living conditions of humankind.” Thus, through this educational prospect, the lives of the people in the villages changed, and their lives impacted and prominently enlightened the next generations today.10

Slanting N. Sangma, a retired Headmaster of Rajasimla Junior Basic School, once commented, “All the developments and social changes would not be possible if there were no educational system at Rajasimla.” “Today, our children have an opportunity to take an admission in the schools and mold themselves to be the leaders for tomorrow,” he added. Thus, these schools are effectively attending to the upcoming generations, enabling them to be capable enough to become future leaders for the community life of the Church and society.11

General View
Much was said about the early schools and literary works. From the beginning, so many results were there, yielded for the sources of life in a new front, and became like the planted green trees ever. People from far and near that generation searched for the true meaning of education. Their eagerness and enthusiasm for learning made them successful. So, the Garos could not forget those cherished people like—David Scott, Francis Jenkins, Dr. Bronson, Dr. Stoddard, and his wife and many ‘others’ whose labor essayed the Garos were wise and enlightened. Their well-being efforts made the Garos come out from the wild habits in the hill ranges and become the showers of blessing. 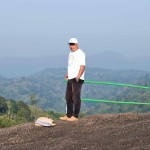 This church was established on April 14, 1867 by Dr. Miles Bronson, Missionary to Assam from American Baptist Mission Society. He ordained Omed W. Momin charged him as Pastor to preach, to baptize and to be "faithful" until death. There were 30 believers who stepped forward to be the followers of Jesus Christ and took baptism by Dr. Miles Bronson. As of now, there are 2,830 believers in the church and doing the Christian duty.

Bible Verse of the Day

Be perfect, therefore, as your heavenly Father is perfect.
Matthew 5:48